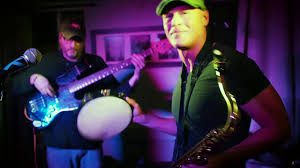 iCal
Join us Friday, October 15th, 8pm-11pm, for live music by The Junior Bryce Band!
Junior Bryce has been working as a saxophone sideman for many years in the Washington, DC area. You may have seen him with Blue Miracle, Justin Trawick, the Golden Road, Jarflys featuring Jimi Haha,All Mighty Senators, Bond & Bentley, and so many others. All of the different bands he’s played with are soulful ensembles with plenty of space to jam. Lately he’s been hosting his own show with the Junior Bryce Band, booking at only the very coolest establishments. The Junior Bryce Band plays rare groove and hippie funk, with a little Jazz and R&B flavor. Family-friendly and suitable for dinner and dancing.