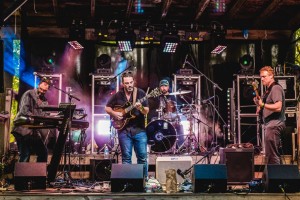 Ginada Pinata taps the influences of jazz, funk, rock, fusion, trance and drum and bass, blending them to create an organic vibe that continually entertains and excites audiences at each and every show. Founded in Shepherdstown, WV in 1998 (and getting funkier all the time) Ginada has relentlessly pushed the musical envelope in search of new sounds and feels. The result is a stylistic collage which truly sets them apart in their genre. 2001 brought the release of “Talking to the Boss,” a recording which at once highlighted the musicianship of the group while serving as the musical template from which they have evolved into one of the area’s most formidable improvisational groups. Over the years Ginada Pinata has played many festivals and clubs including Opera House Live, Sunshine Daydream, 123 Pleasant St., The Barns of Wolftrap, The Velvet Lounge and countless other music venues in the greater Mid-Atlantic region. Their drive is to produce a live show which consistently redraws the boundaries of the traditional quartet – and they’re only getting started.