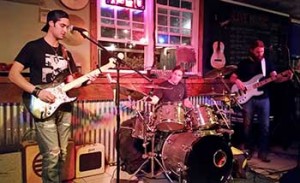 Colin Thompson was washed in the blood of American music from the time he could crawl. The son of acclaimed Americana music artist Randy Thompson has toured Europe numerous times, received raving national and international reviews. His playing has been heard on satellite and terrestrial radio all over the US, Europe, and Australia. Already a seasoned performer at his young age, he has developed a playing style that is his own. Often compared by the press to other great slide guitar players (Sonny Landreth, Duane Allman, Derek Trucks, Lowell George), his playing is a fresh and unique combination of all his influences mixed with is own unique spin.